So, I’m about as Good at relationships as I am sleeping in tents!!! No pressure to get this right then! I was taking my new fella on an adventure!

Marc hadn’t wild camped before so going in winter was going to be a challenge! Or so I thought. He’s mountain savvy and climbs and scrambles so I was sure all would be well.

The first hiccup came at home as we tried to fit as much stuff as possible into a Berghaus 45 litre cragging pack! It was bursting at the seams but we got there. My Exos 48 was also very full and very heavy; still at least we didn’t have to carry water! There was plenty of snow and I packed 2 full Jetboil cartridges which would be ample.

We were finally on our way to Coniston. I had recently acquired a North Face Mountain 25 at a very good price so at least Marc wasn’t subjected to the bivvy bag just yet!

We pulled up in Coniston at the Meadowdore where we had decided to go for breakfast but sadly everything seemed to be shut till 10! Only 20 minutes to wait and we were in plenty of time.

We were soon in after a quick visit to the Spar for some bits. A perfect full English was soon placed in front of me…. They do very good breakfasts in here. Not too much and never a grease fest! We chatted about our plan. I wanted to head up Wetherlam first via Hole Rake and then over to Swirl How as the sunset would be perfect from here.

Breakfast was soon demolished and we headed up the Coppermines Valley top park. The Sky was blue and the air cold. It was perfect! We soon shouldered our heavy packs and cracked on. The tent was weighty but fine; my pack felt no different and I never weigh it anyway. I always just think that what is in there is needed so it’s irrelevant what it weighs.

Luckily Marc is pretty hill fit so we had a steady pace and were soon in the snow line. It was alpine. Absolutely class weather. There were very few people about either which was nice. I explained to Marc how many false summits weather had; I think he was getting cheesed off by number 5!

Eventually though we got there. The breeze was an icy north westerly, it was going to be a cold one… I worried a little that he may not enjoy it but we would see later. As we left the summit of Wetherlam we hit our first proper neve which was nice underfoot. 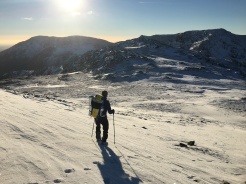 I pointed out all the summits to Marc so he could get his bearings based on what he had done here previously. Soon we were bypassing Black Sails; we went a little higher than usual as the path was well banked out above Greenburn and we were only carrying poles as oppose to an ice axe, better safe than sorry.  Soon we were dropping to Swirl Hawse, the sun was just starting to drop a little. It was after 2.30pm and sun sets at 4pm. I was determined to be set up by then so I explained to Marc we were going  to have to get a wiggle on J He was cool and took it in his stride! The Prison was snow bound but well-trodden so we didn’t need crampons. I looked round and breathed the air, it was icy cold as we now in the shade.. Marc was a little behind and I heard something about feeling like Ueli Steck!! I laughed as I watched him trying to keep up with my ridiculous legs! He’s only small…. Bless him, he was doing an awesome job. Baptism of fire! I was soon approaching the summit at last with Marc not far behind me.

We regrouped and started to look for a good pitch. We soon found a flat area. Marc helped to check for rocks then he was sent off to get changed out of damp layers and take pictures whilst I sorted the tent. I really wanted to pitch it myself and see how it was to do alone.

Less than 15 minutes later it was up. I like this tent I thought. It was easy to pitch and super roomy. We were soon inside sorting kit. I had a touch of the hot aches as I got cold putting the tent up in thin gloves! My fingers hurt….ugh… Not the first or the last time that will happen this year I thought! 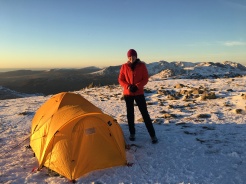 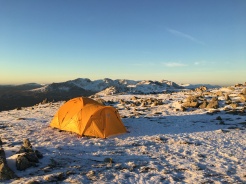 I was soon engulfed in my favourite jacket of all time and melting snow into the Jetboil. The sun was starting to drop and it was breath-taking… utterly stunning. A lone fell runner approached the summit and we watched him just sucking in the view. We had a chat, about how amazing it was! All three of us just buzzing and excited by the sheer beauty of it all. We watched as he ran off towards Great How. That was the last person we saw. We cupped our mugs as the sun started to dip. It was just stunning. Marc’s face was one of awe. We walked over towards Great How to take photos. I got arty with Marc’s sun glasses!

The snow turned orange and peachy as the sun cast her final light before dipping. The haw frost glowed and then turned icy blue. We turned to the tent to see the most prominent pink/purple sky glow I have ever seen. Marc was getting treated to the best show ever, I was glad we were sharing it.; despite enjoying being on my own mostly. 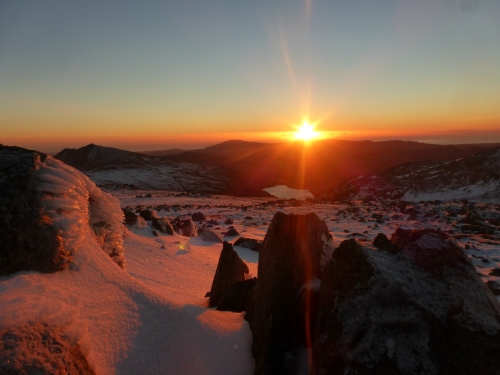 Then comes the cold blue. As anyone knows who stays in the mountains after sunset in winter the temperature drop is almost instantaneous. It was chilly! It was dinnertime also J Marc was definitely hungry and  he was about to be introduced to the delights of Bla Band Wilderness stew! I made his first and then did mine. He was soon tucking in. He was blown away by how good it was! My water was soon boiling and I was soon tucking in as well. The wind had picked up a little now and it was super cold. Frost was forming on the inside and outside of the fly already.

We finished off with caramel shortbread and a cup of wine. We chatted about stuff and mountains and then decided to go for a night walk. Marc hadn’t been to the WW2 memorial so I suggested we take a walk to Great Carrs. We zipped up the tent and set off. The snow was dry and powdery with the cold. The silhouettes made the mountains look dark and foreboding. With super powerful Black Diamond Revolt headtorches we could light up the alpine looking faces. It was spectacular and we were both thoroughly enjoying our night. Marc kept saying he could totally ‘get’ why I do this!

We approached the memorial and I explained to Marc where the Halifax struck and then pivoted down the front face into the combe below. Tragic. We stood and thought about those poor men in the dark under the stars and paid our respects before trudging on… Lest we Forget..

We were soon on the summit of Great Carrs. We looked over the edge into the darkness below. The snow sparkled under our lights and the stars shone brightly above. Perfect. We took some photos and looked in awe at our surroundings. It is a different world at night. The silence was deafening. We decided to head back to the tent for more wine, whisky and warm drinks

I took a few pictures before getting back in and captured The Plough above the tent J We were soon cosied up again and melting snow. My wine felt cold but nice all the same and when we cracked open the hip flask the whisky tasted good! I added some to our final drink of the night, hot chocolate. 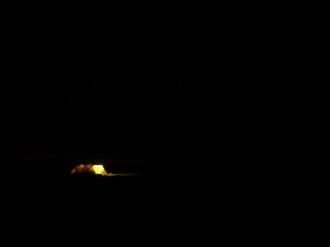 I checked the weather and also got my star gazer app opened. We had both been drawn to one star; it was Vega. It was a ‘twinkler’. A bit like Arcturus but ‘smaller’!  The weather now looked clear for the morning which made mw super happy as it had forecast some cloud. We went out of the tent for the last time and looked at the stars and cleaned our teeth before turning in. It was so cold but utterly amazing!!

We got settled in for the night, of course I wanted to sleep with the door open! We snuggled in, engulfed in down. I was soon comfortable but for my back; Marc was gently snoring beside me…he got a gentle prod…he went quiet.

The night passed and we both slept well. It was 6am and we were soon out and in awe again. Our boots were frozen and feet cold but it was worth it. The sunrise promised to be wonderful and it didn’t disappoint. We got had a brew on and I had brought up some Bla Bland Fruit porridge which was welcome and warming. I shovelled mine in and ran around with the tripod for a while. Our beautiful sun soon made an appearance and turned everything pink then gold. Marc was blown away-as was I. To witness such beauty for the first time is an amazing experience. It’s just the best feeling. He was being treated to the finest of what The Lake District has to offer – a perfect, snowy sunrise..

We took photos and watched as the sun shone her light over all the mountains. Filling the shaded areas with light and warming our cheeks.. Time for more coffee! It would soon be time to break camp. It took no time to get the tent down and we were soon packed and ready to walk out. I had chosen Levers Hawse and was hoping it wouldn’t be too banked out with snow. We passed some amazing raised foot printed in the snow. More photographs! Marc sadly took a bit of a clatter on the frozen turf…ouch..It was iron hard in places! He was ok but for a bruised ego! I managed to stay upright..I am so careful because of my back…

The top of Levers Hawse was treacherous. We picked our way down very slowly and carefully until the point where the angle eased slightly. It was warm in the sunshine and the tarn looked cool and almost inviting. We passed a chap we had seen the day before on Wetherlam. We had a chat to him before heading round to the Back Strings of Coniston Coppermines. I pointed some bits out to Marc before heading over the dam. Our adventure was nearly over. Just the mine track down to the car.

Soon we were back in the Meadowdore with a sausage and egg butty! A perfect end to a perfect night out. Marc was great. He really took it in his stride and thoroughly enjoyed the trip.